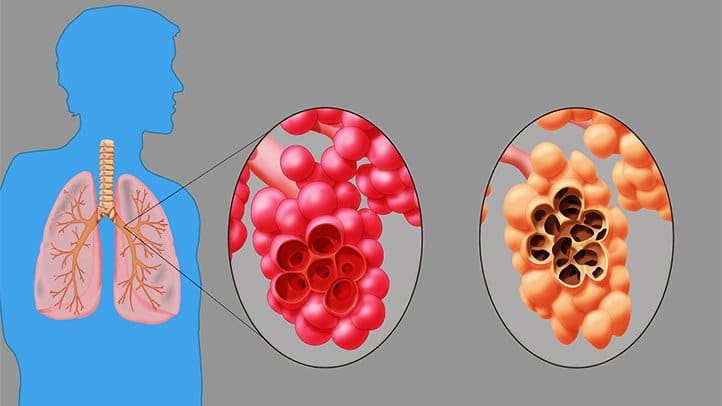 COPD or Chronic Obstructive Pulmonary Disease is an umbrella term for a group of progressive lung disorders that present as difficulty in breathing as the major complaint. Long term exposure to irritant substances such as cigarette smoke and pollutant particles has been accepted as a known risk factor for the development of these conditions. A rare genetic condition known as the alpha-1 antitrypsin (AAT) deficiency has also been linked to the pathogenesis of COPD.

These conditions are observed to be more prevalent in middle to old aged individuals, with equal incidence in both genders. Individuals suffering from COPD are proposed to be at an increased risk of developing repeated respiratory infections, lung cancers, heart disease, and other morbid conditions. It remains a major cause of disability and the fourth leading cause of death in the United States. It is estimated that around 30 million individuals in America have diagnosed COPD, with nearly half the number living without a diagnosis.

Currently, COPD remains an incurable condition that can, fortunately, be effectively managed with vigilant care. With adequate therapy initiated in time patients with COPD achieve good symptomatic control, improved quality of life, and a significant reduction in associated complications.

COPD has two most common variants chronic bronchitis and emphysema, with many patients suffering from a combination of both conditions.

There are two main forms of COPD:

The sins and symptoms associated with COPD usually present late until significant lung damage has already occurred. These include:

Patients may need immediate medical attention if any of the following sign and symptoms develop acutely;

People with COPD are also prone to experience episodes called exacerbations or flare-ups, during which the symptoms worsen for a short duration such as few hours to days. The breathing difficulties worsen over time and limits the daily activities of the affected individuals.

Cessation of smoking, medications, supplemental oxygen therapy, vaccination, respiratory rehabilitation, and surgery remains some practical modalities that are employed for the management of COPD.

Cessation of smoking and other lung irritants such as dust, fumes, and secondhand smoke, etc. is considered as the first-line management protocol that significantly reduces the pace of progression of the disease. Other beneficial lifestyle modifications include the addition of a healthy diet, nutritional and vitamin supplements, and exercises that promote lung healthy lung function.

Bronchodilators are drugs that relax the muscles found in the respiratory tract to increase the airflow towards lungs. Depending upon the severity of the condition short or long acting bronchodilators are routinely prescribed to COPD patients. These can be administered through inhalers and nebulizers that ensure the direct delivery of medication to the lungs.

The use of inhaled corticosteroids in combination with bronchodilators is found superior to their use alone. They can be administered in both inhaled and oral forms.  Steroids are found effective in reducing the severity of inflammation and decreasing the excessive mucus production observed in acute and long-standing cases. However, long term use of corticosteroids is associated with potential adverse effects such as the increased risk of pneumonia.

Patients with COPD are highly vulnerable to acquiring repeated respiratory infections such as seasonal flu and cold. Therefore, they are frequently recommended to get yearly flu shots and pneumococcal vaccines as a prophylactic measure.

Pulmonary rehabilitation or rehab is a multidisciplinary program that aims to improve the physical and physiological well-being of individuals suffering from COPD and other chronic lung diseases.

Rehabilitation includes physiotherapy programs, disease management training, and nutritional and psychological counseling that train individuals to manage their daily routines with ease. The concerned faculty include doctors, nurses, physical therapists, respiratory therapists,  and dietitians, etc that formulate a plan in regards to the patient’s personal needs.

Patients with end-stage COPD may require long term oxygen therapy to prevent the development of right-sided heart failure. Long-term oxygen therapy should be used for at least 15 hours a day with as few interruptions as possible and for ideal results as long as 24 hours a day. Patients may also require immediate oxygen supplementation in acute exacerbation or flare-up of COPD. Frequently patients are provided with portable units that can be easily carried around.

Surgery is always kept as the last resort in cases where conservative therapy fails to manage active symptoms. Three commonly performed procedures in patients with COPD are briefly described below.

Bullae are large air spaces that develop in emphysema due to the destruction of normal air sacs. These tend to interfere in normal breathing requiring additional energy to inflate leaving patients breathless with exertion. Bullectomy or the removal of bullae is performed in individuals suffering from these complaints.

Another surgical procedure where the diseased or the damaged part of the lung is resected out to help improve breathing ability, lung capacity, and overall quality of life in selected patients. The success of this surgery lies strongly in the anatomical location, extent, and severity of the diseased tissue along with the patient’s exercise tolerance and ability to tolerate surgery.

For severe disease, refractory, or unmanageable with other modalities, lung transplant is offered to COPD patients. Over 70% of these selected patients receive a double lung transplant. Recipient of the transplant does observe partial or complete relief from the prior symptoms, however, the transplanted lung itself is always at a high risk of acquiring infection and rejection reactions.